This is a monumental day for me: Karan Johar on receiving Padma Shri Award

Filmmaker Karan Johar, who received the Padma Shri award at Rashtrapati Bhawan on Monday, said he felt "honoured and humbled". Taking his Instagram handle, Karan posted a video of him receiving the award. "Today I feel worthless! I am honoured and humbled to have been awarded the prestigious Padma Shri Award. I feel very fortunate to have received it at the hands of our esteemed President Shri Ram Nath Kovind," he said. 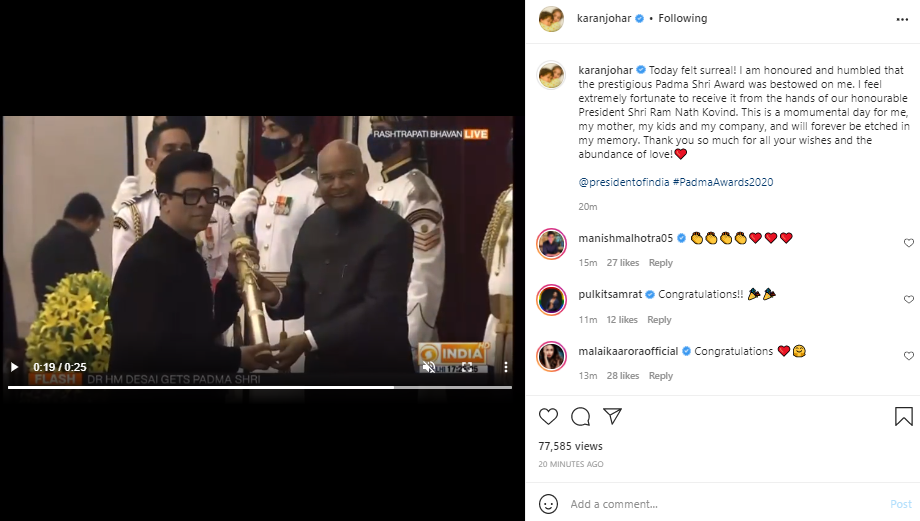 "This is a day of remembrance for me, my mother, my children and my company, and it will always be etched in my memory. Thank you so much for all your wishes and the abundance of love," she added. Fans, friends and fellow members of the film industry are flooded with comments and likes. “Bravo, Karan,” wrote Ranveer Singh. "Congratulations," said Madhuri Dixit. "Congratulations sir. You deserve it well," added Tiger Shroff.
Varun Dhawan also took to his Instagram handle congratulating his first film 'Student of the Year' director. 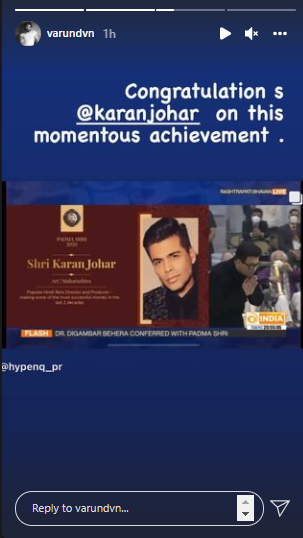 Taking his Instagram Story, Varun posted a photo of Karan at the event and added, "Congratulations @karanjohar on this great achievement." Karan's mother Hiroo Johar accompanied him to the famous ceremony.
Meanwhile, at work, Karan currently holds 'Rocky Aur Rani Ki Prem Kahani', starring Dharmendra, Jaya Bachchan, Shabana Azmi, Alia Bhatt and Ranveer Singh. Besides, she also has 'Takht' for her cat.
Apart from his directing programs, the filmmaker also has a lot of production work on the way. He recently produced Akshay Kumar and Katrina Kaif-starrer 'Sooryavanshi', and 'Brahmastra' by Ranbir Kapoor-Alia Bhatt.
Karan will also introduce South African star Vijay Deverakonda with Bollywood with 'Liger', starring Ananya Panday as the lead actress.