Bollywood actress Shilpa Shetty recently shared a thought-provoking message about ‘recovery from suffering’ amid the ongoing controversy over sexual problems surrounding her husband and businessman Raj Kundra. The actor, who has been active on social media and after the controversy, continues to share encouraging posts on his Instagram account. Taking his IG story, the character of ‘Dhadkan’ shared a photo from a book that included a quote from Christiaan Barnard. The quote reads, "Suffering does not make art, recovery does." Below the scale was a thoughtful message emphasizing how the recovery process from difficult times makes a person stronger.It ended with the thought, "I hate bad times like everyone else, but I know I have enough strength to get through them and recover from them."

Also Read: An inspiration note about going from No 1 To No 1 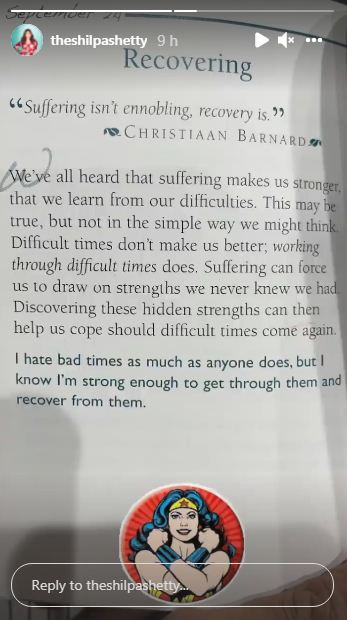 Shilpa's post came after her husband Raj was granted bail on Monday by the Mumbai Magistrate's Court in connection with a Rs 50,000 pornographic video. The court also granted Raj's colleague Ryan Thorpe bail. He will also have to provide a guarantee of Rs 50,000. Property Cell of Mumbai Crime Branch had filed an additional 1500-page lawsuit filed in the Esplanade Magistrate's Court over a pornographic case against Raj. Raj was arrested by police on July 19 along with 11 other people on charges related to the making of sexually explicit films. Meanwhile, at work, after taking a while following the arrest of her husband, Shilpa is also busy judging the dance program 'Super Dancer 4', alongside Geeta Kapur and Anurag Basu. Prior to the film, he was recently spotted in Priyadarshan’s ‘Hungama 2’.