Are your words only relevant if you…

'The African Dream: The Man With the…

Sooraj Pancholi does a headstand on a platform of nails, drives a bulldozer through a wall, slams dudes through solid objects, does a laser dance in a disco and swings Athiya Shetty (who has taken three selfies within 15 seconds) around like a weapon to knock out a giant baddie. These are the first few minutes of Hero, directed by Nikhil Advani, and if there was any justice in this world, the film would have ended there. Unfortunately for Pancholi, Shetty and all those watching Hero, the world is cruel and unusual.

It’s difficult to say what debutants Pancholi and Shetty are capable of because Advani’s remake of Subhash Ghai’s Hero starts off as awful and ends as boring. There are about two genuinely emotional moments in the film’s 131 minutes. In these, one senses Shetty in particular may just have some acting talent, but Advani and his screenwriter Umesh Bisht would rather bludgeon the audience with stupidity than give the newcomers an honest chance at winning us over. 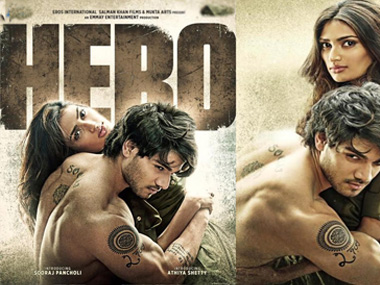 Hero is a ’80s’ film that should never have been taken out of the vault. The dialogues, peppered with outdated flourishes like “imaandari ka pilla” and “aaj main surprise nahin, shock dene aaya hoon”, are melodramatic. The only twist in Hero is when Shetty ties up her hair. The fights are unexciting. The cinematography is dull and the songs sound like wailing cats in heat who have been auto-tuned. Salman Khan’s “Main Hoon Hero Tera” is the only example of melody in the soundtrack and Khan displays more acting in the sweet, little video of the song’s recording than he has in most of his blockbusters. Sadly, he shows up only at the end. There’s a lot to endure before you get your Bhai fix.

Sooraj (Pancholi) is a thug whose bulging muscles hide a heart as mushy as a roasted marshmallow. When he isn’t bodybuilding or beating up people, he’s helping the needy. For no fault of his own, he lands up in the middle of a glowering contest between baddie Pasha (Aditya Pancholi) and Inspector General Mathur (Tigmanshu Dhulia).

Pasha tells Sooraj to kidnap IG Mathur’s daughter, Radha (Shetty). Since Pasha is like a father to Sooraj — apparently, Sooraj’s mother was like a sister to Pasha, which hints at a rather incestuous family tree, but never mind those details — our buff hero spirits Radha away. It helps that Radha has the intelligence of a dull four-year-old. Despite having two policemen in the family (her father and brother), Radha finds nothing odd about a Mumbai police inspector taking her to a safe house in Jammu. It also doesn’t bother her that she’s in a wooden hut, in the middle of nowhere, with five strange men she’s never seen before and that these ‘policemen’ don’t let her call home. There are snowball fights, drunken nights around a bonfire and an occasionally shirtless Sooraj to ogle at … what more could a 20-something PYT want?

Along the way, a man starts singing in a girl’s voice, Sooraj and Radha fall in love, Pasha roars mightily, IG Mathur bays for Sooraj’s blood, and a bicycle discovers its inner Rajinikanth and neutralises a bullet. And then, as if 115 minutes of the film’s barely-there plot wasn’t enough of an endurance test, we get a song that recaps all of the first half and parts of the second half.

By the time interval strikes, you’ve got to feel bad for young Pancholi and Shetty. Sooraj and Radha may be sporting bruises that look like the make-up team was using lipstick to make tally marks — perhaps to show how many days of shooting these two newcomers had survived? — but the real wounds are deep. Varun Dhawan and Alia Bhatt got the vapid but glossy Student of the Year. Ranbir Kapoor and Sonam Kapoor got the nonsensical and lavish Saawariya. The son of Aditya Pancholi and daughter of Sunil Shetty get Hero, a film as B-grade as their fathers’ filmography. Hero is ill-conceived, outdated and lazily made, with neither director nor crew giving a hoot for details like continuity or logic. Pancholi and Shetty deserved better; not because they’re star kids, but because as actors they commit as much as they can to the colossal ineptitude that is their debut film.

Yet, rather than being a cakewalk, Hero is actually a serious challenge for both Pancholi and Shetty. Shetty has to showcase herself in a role that requires her to play a bimbo and make sure she doesn’t blink when the wind machine blows her hair away from her face. This is a shame because with her athletic frame and deadly cheekbones, it’s easy to imagine Shetty as a desi Lara Croft.

Pancholi is making his debut at a time when Bollywood has a set of versatile young actors who are proving to be adventurous in their choices and versatile, but all this young man gets to do in Hero is show off his musculature. Unfortunately for him, every hero in Bollywood seems to have abs and the bland character he plays in Hero makes Pancholi look like a pale replica of Salman Khan, but without Khan’s charisma.

On the plus side, things can only look up for Pancholi and Shetty after this, because it’s going to be tough to find a project as forgettable as Hero. Here’s to their future.

DigitalGaliyara (OPC) Pvt. Ltd. is one of fastest-growing media and entertainment companies in India and having iconic brands that offer a platform to read news and articles in specific niche and category. Digital Galiyara defines entertainment and Journalism in India by touching the lives of people through online presence with their in house websites bollywoodgaliyara.com, gadgetgaliyara.com and newsgaliyara.com.

Review Abhay 2 – Impressive benchmark for its superb combination among aspects

Review – Sadak 2, a total waste of time and legacy of Sadak original